CBO and JCT Impact Estimates in for House-Passed AHCA

On May 4th, the House of Representatives passed H.R. 1628, the American Health Care Act of 2017. The Congressional Budget Office (CBO) and the staff of the Joint Committee on Taxation (JCT) estimated that enacting that version of H.R. 1628 would reduce the cumulative federal deficit over the 2017-2026 period by $119 billion.

Since that savings is well over the $2 billion deficit savings minimum, the bill may now be passed to the Senate to formally begin that chamber’s voting process without the need for an additional House vote. In addition, because the CBO and JCT estimate that enacting H.R. 1628 would not increase net direct spending or on-budget deficits in any of the four consecutive 10-year periods beginning in 2027, it is more likely to clear the Senate Parliamentarian review under the budget reconciliation process.

Download the complete CBO report and the JCT estimate here.

The CBO and JCT estimate that H.R. 1628 (AHCA) would reduce federal deficits by $119 billion over the coming decade and increase the number of people who are uninsured by 23 million in 2026 relative to current law. The JCT estimate also finds that the specified tax provisions would reduce revenues by $662.6 billion over 2017-2026.

Key findings from the CBO’s Cost Estimate Report include:

Effects on the Federal Budget

The CBO and JCT estimate that, over the 2017-2026 period, enacting H.R. 1628 would reduce direct spending by $1.1 billion and reduce revenues by $992 billion, for a net reduction of $119 billion in the deficit over that period (see Table 1 below). The provisions dealing with health insurance coverage would reduce the deficit, on net, by $783 billion; the non-coverage provisions would increase the deficit by $664 billion, mostly by reducing tax revenues. 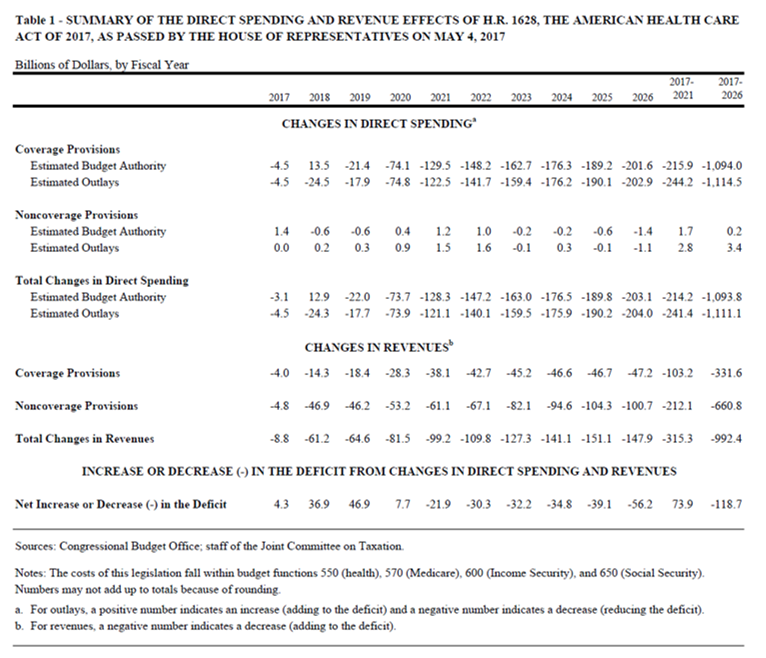 The largest savings would come from reductions in outlays for Medicaid and from the replacement of the ACA’s subsidies for non-group health insurance with new tax credits. (see Figure 1 below). Other savings will come from:

The largest increases in the deficit would come from repealing or modifying tax provisions in the ACA that are not directly related to health insurance coverage, such as repealing a surtax on net investment income, repealing annual fees imposed on health insurers, and reducing the income threshold for determining the tax deduction for medical expenses.

The CBO has not completed an estimate of the potential impact of the legislation on discretionary spending, which would be subject to future appropriation action. 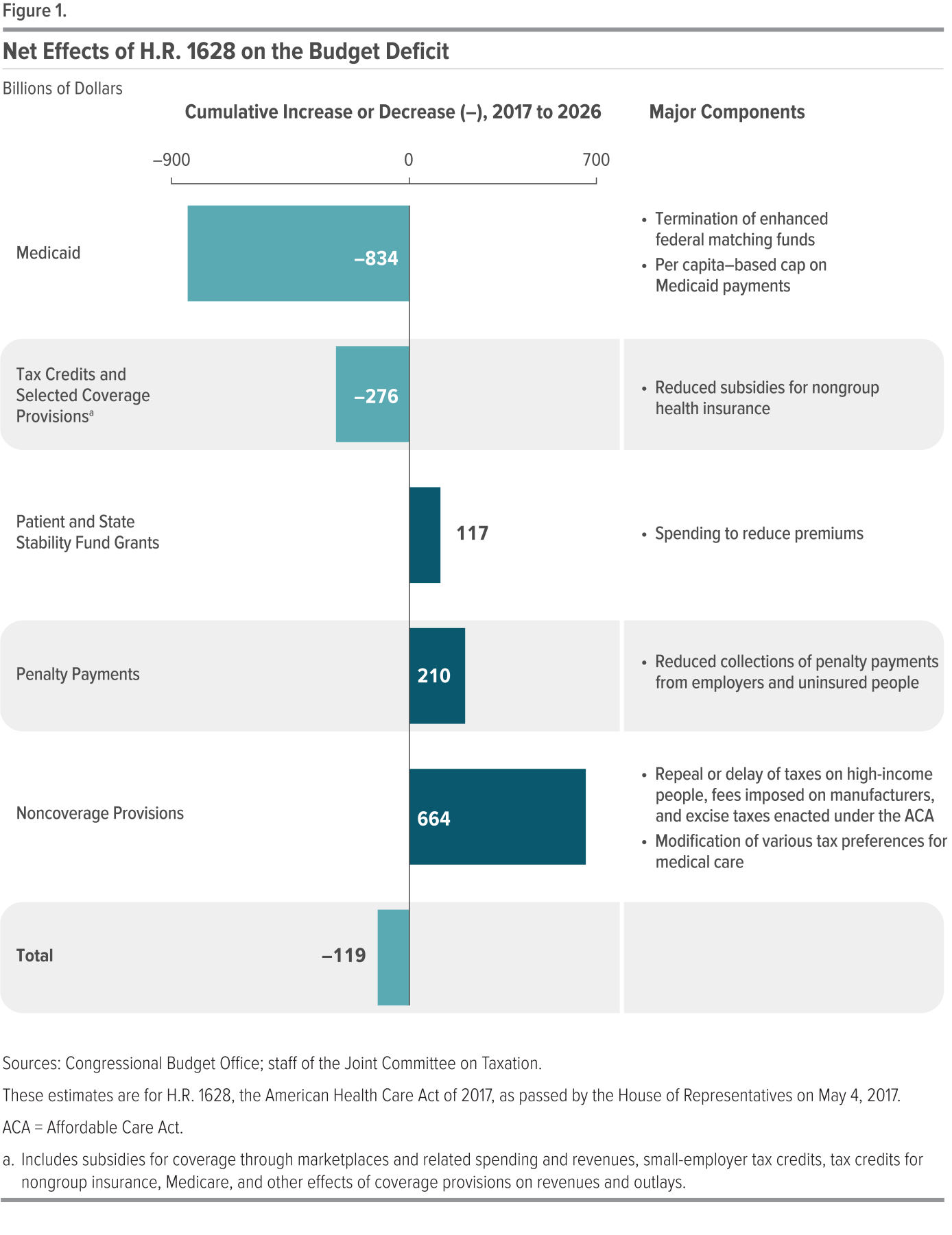 In the report, the CBO and JCT include those with limited coverage (mini-med plans) in their definition of “uninsured”. The CBO and JCT estimate that:

Stability of the health insurance market

Although premiums have been rising under the current law, most subsidized enrollees purchasing health insurance coverage in the non-group market are largely insulated from increases in premiums because their out-of-pocket payments for premiums are based on a percentage of their income – the government pays the difference between that percentage and the premiums for a reference plan. The subsidies to purchase coverage, combined with the effects of the individual mandate, which requires most individuals to obtain insurance or pay a penalty, are anticipated to cause sufficient demand for insurance by enough people, including people with low health care expenditures, for the market to be stable in most areas.

Nevertheless, some areas of the country have limited participation by insurers in the non-group market under current law. Under the House-passed legislation, the CBO and JCT anticipate:

The agencies expect that the non-group market in many areas of the country would continue to be stable in 2020 and later years as well, including in some states that obtain waivers from market regulations. Even though the new tax credits, which would take effect in 2020, would be structured differently from the current subsidies and would generally be less generous for those receiving subsidies under current law, other changes (including the money available through the Patient and State Stability Fund) would, in the agencies’ view, lower average premiums enough to attract relatively healthy people to stabilize the market.

However, the agencies estimate that some market instability could occur beginning in 2020 resulting from market responses to decisions by some states to waive two provisions of federal law, as would be permitted under H.R. 1628:

The CBO and JCT anticipate that most healthy people applying for insurance in the non-group market in those states would be able to choose between premiums based on their own expected healthcare costs and premiums based on the average healthcare costs for people who share the same age and smoking status and who reside in the same geographic area (community-rated premiums).

The waivers in those states could also produce a rise in community-rated premiums that would disproportionately affect people who are less healthy (including those with pre-existing or newly acquired medical conditions) who would ultimately be unable to purchase comprehensive non-group health insurance at premiums comparable to those under current law, if they could purchase it at all, potentially leading to non-group markets in those states becoming unstable and a possible increase in the number of uninsured.

Effects on premiums and out-of-pocket payments

Starting in 2020, however, average premiums would depend in part on any waivers granted to states on essential health benefits and community rating. The CBO and JCT estimate the following:

Although premiums would decline, on average, in states that chose to narrow the scope of EHBs, some people enrolled in non-group insurance would experience substantial increases in what they would spend on healthcare. People living in states modifying the EHBs who used services or benefits no longer included in the EHBs would experience substantial increases in out-of-pocket spending on healthcare or would choose to forgo the services.

The Senate’s bill is likely to include significant differences in how it addresses EHBs, the timing of provisions that delay or repeal taxes and fees, and have less deficit savings while covering more Americans. It may also include a tax on employer-sponsored health plans, which was not in the House passed bill but is supported by Speaker Ryan.