3 Threats to Healthcare Consumerism, and What to Do About Them

According to Mercer, 72% of large employers will offer a consumer directed health plan (CDHP) by 2019, up from just 20% a decade earlier. 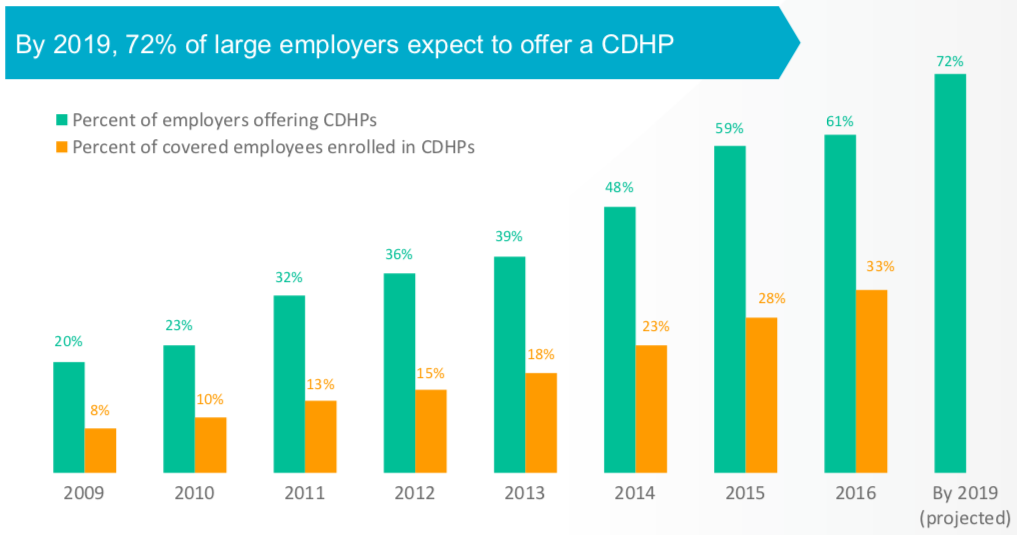 But, for all that, things aren’t entirely rosy. While many employers now offer consumer-driven plans, uptake by employees isn’t phenomenal with only around a third of eligible employees enrolled in a CDHP.

Healthcare consumerism was founded on one basic assumption: That if people were better informed and had greater involvement in their healthcare funding (including financial incentives and repercussions) they would make better decisions.

And, as the past several decades have demonstrated, that assumption is completely true. People enrolled in well-constructed CDHPs consistently make better health decisions and are far less likely to overpay for healthcare services.

There’s just one problem: Persuading people to enroll in CDHPs in the first place. And, in trying to address this problem, there are three primary hurdles to overcome:

A high proportion of average Americans have a disturbingly low level of fluency, not just with CDHPs, but with healthcare funding in general.

According to the Alegeus 2018 Health & Financial Fluency Report (soon to be released to the market), 59% of consumers claim to be confident in their knowledge of healthcare terms and concepts, BUT:

And, when the lens is narrowed to consider healthcare consumerism specifically, things get worse. Just 19% of the general public can pass a basic true or false proficiency quiz on HSAs, compared to 29% for FSAs.

But, those numbers are higher for individuals currently enrolled in those plans, surely?

Yes, but not much higher. For individuals currently enrolled in HSAs and FSAs, the pass rate rises to just 35% and 37% respectively.

All this mounts up to a huge problem for healthcare consumerism. In order for average Americans to understand the benefits of CDHPs over traditional plans, they are first going to need to have a reasonable understanding of basic healthcare funding.

Until that happens, uptake of CDHPs will be severely hindered.

A huge issue for healthcare consumerism, care avoidance is a routine consequence of individuals being underinsured. Specifically, this term refers to households which spend more than 10% of their income on out-of-pocket healthcare costs, not including premiums, or have a deductible that exceeds 5% of their income.

So why is this such a problem? Simple: Underinsured people make terrible decisions. Of those underinsured in high-deductible health plans (HDHPs) with a deductible of $3000 or more:

And, what does all this care avoidance lead to? Preventable, expensive visits to the emergency room, which are bad for everybody. Put another way, it leads to more cost and worse health outcomes.

It’s important to understand that while CDHPs are attractive in part because they can offer lower monthly premiums, if individuals don’t make regular contributions, the higher deductibles can easily fuel the care avoidance cycle.

In order to recognize the benefits of CDHPs, it is vital that average Americans understand basic financial issues. Unfortunately, evidence seems to suggest that many Americans lack the financial literacy – or at least the financial habits – to manage their healthcare plan.

To give you an idea:

Notice how the first three points lead inexorably to the fourth. Many Americans display an extremely poor ability to manage their money, and as a result are woefully unprepared to cope with medical emergencies.

From a healthcare consumerism perspective, this is a problem for two primary reasons. First, if Americans lack the financial knowledge to understand the benefits of CDHPs, they are unlikely to switch away from traditional plans. And, second, even if they do switch to CDHPs, they are likely to manage their plans poorly, leading to greater expense and worse health outcomes.

And, while there are plenty of ways to address these underlying issues, good plan design should be right at the top of the list. Why? Because good plan design incentivizes individuals to make better decisions about their healthcare funding.

So, what are the characteristics of a strong consumer-driven plan?

A simple way to do this is to construct CDHPs to provide equal value to the most popular traditional plan. This helps employees see that employers aren’t simply trying to shift costs, but rather to offer an alternative to the traditional model. At the same time, it’s helpful to set the out-of-pocket maximum on par with the most popular traditional plan, as employees often place great importance on this variable. With these concerns out of the way, it will be much easier to convey the benefits of a consumer-driven plan.

Second, well designed plans encourage contributions. For starters, CDHPs utilize tax-advantaged accounts and high deductibles, both of which incentivize contributions. And that’s great, but more can be done to further the cause. Most notably, employer funding of accounts has been shown to increase enrollment in HSAs and CDHPs, and increase year-over-year employee contributions. And, as we’ve already noted, more contributions mean less care avoidance and ultimately better outcomes for everybody.

Finally, strong plans encourage greater engagement in the selection of care. It’s easy to forget that high deductibles plans aren’t the only ways to incentivize individuals to care about how much their healthcare service cost. Once an individual has gone beyond their deductible, they will act differently depending on the structure of their plan. For instance, if they have a co-pay plan, which is based on them paying a fixed amount, they will be less interested in the total cost of their care than if they have a co-insurance plan which requires them to pay a percentage of remaining costs.

Plans that adhere to these guidelines will naturally overcome all of the barriers listed above: The will be easy for employees to understand, minimize care avoidance, and encourage individuals to invest (and spend) their money wisely.

The future of healthcare consumerism

Ultimately, while there are some significant barriers to increased CDHP adoption, the healthcare consumerism model is clearly gaining ground. As employers increasingly offer CDHPs in place of traditional plans, more employees will come to understand the value of taking an active role in their consumption of healthcare.

But, if the healthcare consumerism movement is to be truly successful, we need more than increased adoption. We need individuals to take full advantage of their plans and to make better healthcare decisions.

And, quite simply, the only way that’s going to happen is if, as a movement, we consistently do two things:

If we can do that over the long term, there’s no doubt healthcare consumerism will overtake traditional plans in the not-too-distant future.

The power of tax-advantaged benefit accounts

How to save money on healthcare today

The rise of telehealth

In the age of COVID-19, do we need the ACA marketplace, Medicaid and a COBRA subsidy?

Online healthcare purchasing is here to stay: Here’s how to get in on the trend

A Message From Alegeus: Our Commitment to Racial Justice and Equality

Assessing the Impact of COVID-19 On Your Benefit Account Business

Your path to differentiation begins now

Learn how Alegeus can help you better compete and win with the industry’s
most innovative consumer-directed healthcare platform.

Schedule a demo Let's talk
We use cookies to optimize site functionality and give you the best possible experience.Sounds good!