The Alegeus partnership has allowed us to conquer giants and create a real presence.

Alegeus sat down with NueSynergy’s Josh Collins to learn more about what has fueled the company’s significant growth over the past 9 years. From smart technology to solid partnerships, NueSynergy has found the secret to success.

What was your first impression of the Alegeus Smart Account experience?

The biggest thing I liked right out of the gate was that Smart Account took on a more Swiss army knife approach than existing benefit apps. We needed a mobile app that did more than just show your balance.

When we first joined Alegeus as a client in 2012, mobile apps were starting to become the new thing in the benefits world. When the original Alegeus mobile app first rolled out, we touted it as the new functionality it was, and it helped us win a fair amount of business. Now that everyone else has caught up, Alegeus has created a whole other iteration that leap-frogs us over everyone else. Smart Account is a differentiator.

What is your favorite feature on the Smart Account Mobile App and why?

I’m most impressed by the Find Care feature. When I first used it, I thought, “Wow, this is really slick, and it actually works!” It’s not just a generic search-for-care thing that other apps have, where you’re sometimes directed to out-of-network care providers. Smart Account takes the find-care concept further than I’ve seen anyone else do it, giving consumers a truly customized experience based on in-network providers, location and more.

The virtual medicine cabinet is also awesome and works well. I believe this will be the most widely used new feature by our customers. 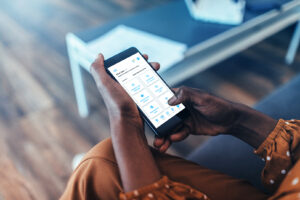 What have you heard from employers so far after launching Smart Account?

We’ve received unsolicited positive feedback. We’ve gotten emails saying, “Love the mobile app, really impressed with the additional features like the medicine cabinet and Find Care. Can’t believe you got all that in one app!” Human resource directors have been especially impressed.

I like to make the analogy between a benefit account and a Ferrari. If you own a Ferrari, you’ve got this amazing thing that is, on the surface, perfect. But at the end of the day, if you don’t have the right tires on the Ferrari, it’s just pretty. It doesn’t do anything. The same can be said for benefit accounts. Without the right technology, you have just another benefit account that sits there.

The tools that we bring to the table with the Alegeus partnership are what make these benefit accounts functional and drive the experience for participants. It’s not like people don’t have other means of searching for prescriptions or providers. But what the Smart Account does is provide the right experience when it matters. When a person is thinking, “I need a prescription,” they can reach for their phone and take care of it. When you tie that process to their money – that’s the game-changer.

With Alegeus, we continue to provide resources for our members when they need them most.

Beyond the technology, how has a partnership with Alegeus benefited your business? What value does Alegeus bring to the table?

Quite frankly, the people we’ve worked with throughout our 9-year tenure have been key our success. When we first joined Alegeus, we were very much a mom-and-pop business. We had four employees and less than 10,000 accounts. The Alegeus partnership has allowed us to conquer giants and create a real presence. There are a million moving parts, and our Alegeus support team has been paramount in overcoming issues and helping us grow. In fact, we grew at 107% in 2018 alone. Now we’re just under 50 employees and have 100,000 accounts. When I say we have a partnership with Alegeus, I mean it’s a true partnership. When we win, Alegeus wins.

Josh Collins is president of NueSynergy, one of the country’s largest and fastest growing third-party administrators of HSAs, FSAs and HRAs. Before joining NueSynergy, Josh was vice president of national accounts for First Horizon Msaver, one of the first HSA administrators. With more than a decade of experience in the healthcare and financial industries, Josh has helped develop and implement benefit account based products and programs for health plans and employers nationwide that support program and cost-control objectives.

Will the Alegeus Smart Account Disrupt and Revolutionize Your Experience & Value Proposition?