There are plenty of myths surrounding the consumer-directed healthcare (CDH) market.

“The plans are too complicated.” “They’re only good for rich people.” “HSAs are just a tax dodge.”

Unfortunately, while untrue, these myths are widespread and are very likely affecting the uptake of CDH plans as a whole.

To help bust some of the more damaging myths surrounding the CDH market, we sat down with Jody Dietel, Chief Compliance Officer for CDHP provider WageWorks. As an expert on all things CDH, Jody was recently invited to speak in front of the House of Representatives Ways and Means Subcommittee on Health on lowering costs and expanding access to CDH plans.

Jody, thanks for taking the time to talk with us today. Before we start, could you tell us a bit about yourself?

“I’m the Chief Compliance Officer at WageWorks, and I’ve been in the CDH market for almost 30 years. I’m a huge advocate of CDH accounts, and even founded and ran my own CDH benefits company for almost two decades before it was acquired by WageWorks. I spend a great deal of time trying to demystify federal and state healthcare funding regulations, and I serve as liaison between WageWorks and a variety of key industry groups and governing bodies.

WageWorks is a leading provider of CDH accounts and administrative services for health savings accounts (HSAs), health reimbursement arrangements (HRAs), and flexible spending accounts (FSAs). In total we provide administration for nearly 85,000 employers nationwide and cover more than 7 million employees, most of whom participate in an HSA or healthcare FSA.

That sounds like a lot! We understand you’ve recently spoken at the House of Representatives on the future of CDH plans, could you tell us a bit about that?

“Absolutely. I was invited to speak on June 6, 2018 in front of the Ways and Means Subcommittee on Health. As Chairman, Peter Roskam explained at the hearing, the subcommittee believes healthcare reforms should empower individuals and families to make their own decisions based on what fits their needs and their budget. I strongly agree with Chairman Roskam’s assertion that health savings accounts (HSAs) are one of the best tools for achieving this goal, and I’ve spent the majority of my career fighting to improve awareness of and access to HSAs and other CDH benefits.

Specifically, I was invited to clear up some of the misconceptions surrounding HSAs and provide context on the barriers employers face when establishing CDHPs. Although CDH is clearly doing good things for healthcare funding, there are significant challenges for employers trying to maximize the utility of their CDHPs, particularly surrounding HSA eligibility and high-deductible plans designed to pay for chronic care services.”

Since you’ve mentioned misconceptions, could you talk about the most common myths you hear repeated about HSAs and how you might respond?

“Certainly. There are plenty of myths making the rounds, but I’ll cover the most popular ones that we can clearly debunk with hard facts and figures.

Damaging Myth #1: HSAs are only good for rich people

A very common misconception about HSAs, which we hear over and over, is that HSAs only work for the rich. This just isn’t true, and fortunately we have the data to prove it.

For starters, the median household income for health savings account holders is $57,060, and according to the latest figures, the median income for households in the U.S. is $59,039. So, clearly HSAs are not out of reach for the average American.

If we break things down geographically, nothing really changes. In only four states, plus the District of Columbia, do health savings account holders have a median household income in excess of $75,000. By comparison, in 18 states the median household income of account holders is between $50,000 and $60,000, and in a further 17 states it’s below $50,000.

There’s a reason why we see these trends. HSAs work for regular individuals and families. Lower monthly premiums are easier to afford, and, when managed properly, the accounts can be (and are) used to cover eligible out-of-pocket medical expenses. 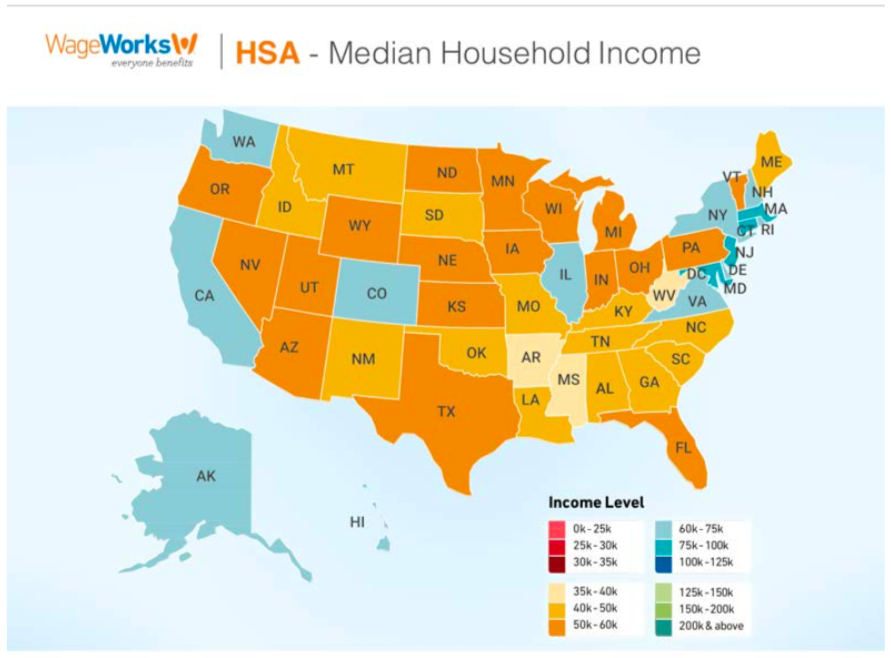 Damaging Myth #2: Only baby boomers can afford to contribute to HSAs

This is an extension of the idea that only rich people can benefit from HSAs, but this time it’s based on generational divides. Supposedly, only baby boomers (people born between 1946 and 1964) can afford to contribute to HSAs.

These types of myths are damaging because they can lead average earners and young people to believe HSAs aren’t for them, or even that CDH as a whole isn’t an option for them. As we can see from the data below, this is clearly untrue, and it’s our job to continue educating people on the genuine benefits of CDH and HSAs. 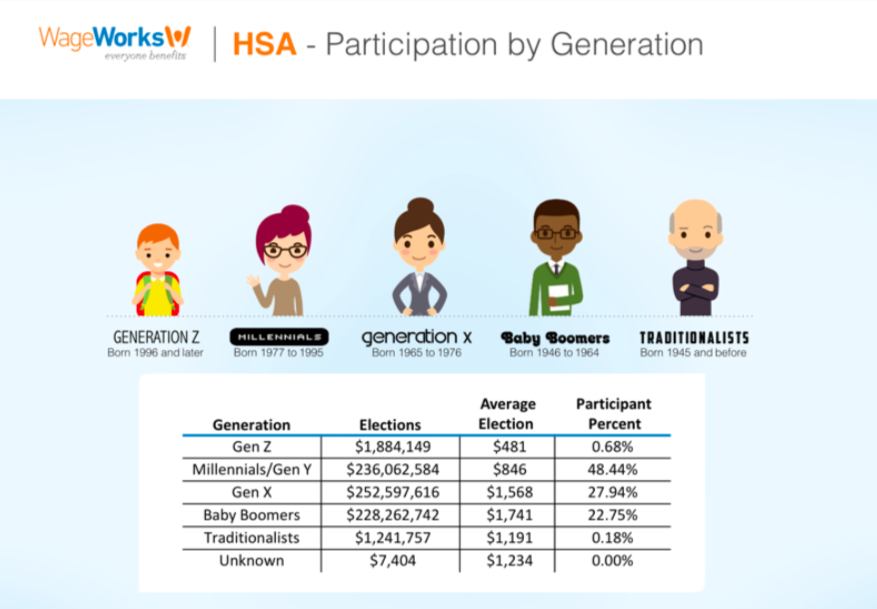 Another myth that we come across regularly is the notion that account holders are using their accounts for something other than medical expenses. Specifically, there’s an idea floating around that they stuff their accounts with money to take advantage of tax breaks. In reality, the data doesn’t support this at all.

Over the last decade, we’ve seen account holders contribute consistently each year, with average annual contributions ranging between $1,032 in 2010 and $1,538 in 2017. When you compare these numbers to annual contribution limits during the same period, which range from $2,900 to $6,760 depending on whether the contributor has single or family coverage, there is no evidence of ulterior motives.

When we look at how account holders spend their HSA funds, things become even clearer. For the most part, they spend down their balance, with only 25 to 35 percent of annual contributions carried forward each year. And, when funds are spent, they are overwhelmingly used to pay for medical expenses.

Of course, we can’t say that HSAs are never used for alternative purposes, but the majority of account holders clearly use HSAs in the intended manner. 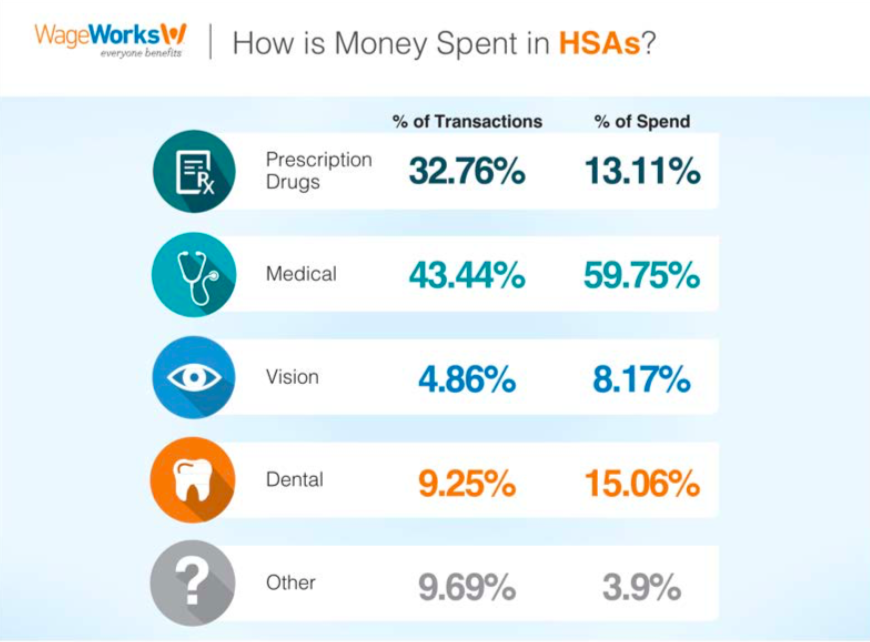 Damaging Myth #4: CDH plans are just too complicated for most people to understand

The reality is that American healthcare funding can be a little daunting at first, but most people were introduced to traditional plans as soon as they joined the workforce, and now they seem normal. CDH plans, by contrast, will require a little extra thought and attention the first time around, but after that, they’re just as simple as any other plan type.

Ultimately, as an industry, it’s our job to help people understand the plans they’re offered, and to demonstrate the value of CDH plans compared to traditional plans. Whether we’re interfacing with consumers directly, or arming employers with the tools they need to achieve this, education is going to be one of the keys to increased CDH uptake over the next decade.”

Jody, thanks so much for your time today. It’s fantastic to see hard data that combats some of the damaging misconceptions surrounding the CDH market. It’s great to see a true CDH expert like yourself being invited to the House of Representatives to advise policymakers, and we hope to hear more from you soon.